Here’s a post I wrote for the Lower Susquehanna Synod Towards Racial Justice team.
https://www.lss-elca.org/were-all-in-this-together-right-by-rev-matthew-best/.
Dear fellow white friend,
We’re all in this together. That is the phrase I’ve heard the most in the midst of pandemic and stay-at-home orders. It is a nice phrase to say, isn’t it? A phrase that seems obvious in a time like this. It’s what we are expected to say. It’s what white folks like myself and you like to say in times like this.
We’re all in this together. It is a sentiment that expresses what we hope for, even as we know that reality doesn’t really match up with it. Can we be honest about that or am I already touching a nerve you’d rather not have touched?  While the thought is nice, if we are honest we would admit that we’ve never really all been in anything together despite the words that we say.
All one needs to do is look at the following chart to see the reality that we aren’t all in this together.  Some are more in it than others. 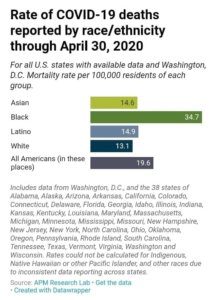 Jesus doesn’t give us an enemy…

Pastor Matthew Best serves as pastor of St. Stephen Lutheran Church in New Kingstown, PA, USA.  He is dedicated to showcasing how encounters with Jesus change people’s lives.
Pr. Matthew brings with him an extensive background in campaign politics and government, entrepreneurial coaching, and food pantry work.  God prepared Pr. Matthew for ministry through these careers which gave him experience in strategy, communication, development, building culture, fundraising, and more.